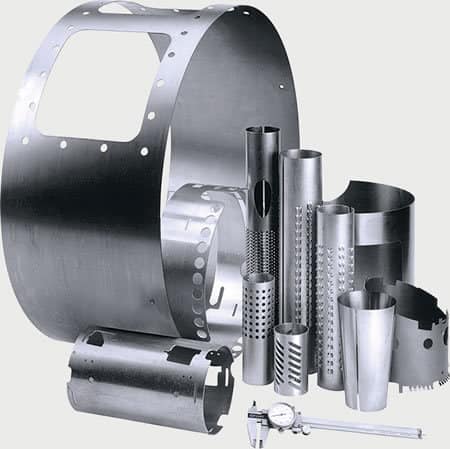 Roll-bending or curving, as defined here, designates the manufacture of sheet-metal parts that are rolled or curved into cylindrical shapes or shapes that have a smooth radius associated with them.

LD, HD, 1212, 1618 & 1824 Models depict a typical horizontal roll-bending machine. Its major parts include the bottom, urethane-covered roll, the top (steel) roll, and the overarm, which can be opened and closed to facilitate the removal of a finished piece part. (See page 17 for models).

In every case, steel plate and steel weldments are used in the frame of the machine. This provides sufficient rigidity and, at the same time, resiliency, necessary to roll parts of varying thickness.

Note that the drawbacks of the three roll systems, whether pinch or pyramid type, are that the work piece is not confined during the bending process, i.e., bending takes place “in the air.” When rolling parts this way to some desired shape and tolerance, several passes might be required with roll adjustments necessary after each pass. This is relatively slow and requires considerable skill on the operators’ part.

The Two Roll Principle method is comprised of a steel top roll and a urethane bottom roll. A segment of this top roll is pushed into the urethane bottom roll, and this deflecting volume of urethane functions the same as hydraulic fluid in a hydroforming process, exerting very high pressures against the steel roll. When sheet metal is inserted between two such rolls, the urethane wraps the sheet metal tightly against the steel roll (similar to a radius forming urethane press brake die), and since the urethane roller is driven, the sheet metal is roll formed into a precise radius. Allowing for natural spring back of the material, this radius remains uniform irrespective of whether the shape of the part being formed is a complete circle, or is only a segment of a circle. In most applications this will eliminate the necessity of either pre-forming or cutting off the ends. The flat spots on the leading and trailing edges are very minimal (approx. one to four material thicknesses, depending on the type of material). Otherwise difficult-to-roll sheet metal parts, such as those with perforations, cut-outs, uneven feeding or trailing edges, embossed parts, etc. can be formed without kinking or fluting. Finally, the relatively soft urethane surface will not mar or scratch finished surfaces.

Getting Parts With Different Radii

In all cases the radius of the rolled part is controlled by the radius of the top roll and the natural spring-back of the material (so accurate is the pressure of the two roll
system that if, in a given run, parts with wrong radius start coming off the machine, the thing to do is to check the material quality, not the machine setting). In other words, the machine has a “zero tolerance”, meaning that variations in the free diameter of the rolled part are due only to the variations (hardness, temper and thickness of material) in the natural spring-back of the material.

Some of the disadvantages of a Three Roll, Pinch-Type or Pyramid-Type system include: 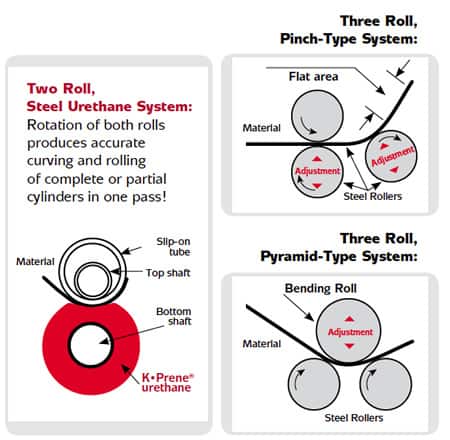 The One Pass Acrotech method permits rolling segments of cylinders or complete cylinders from all types of sheet metal – finished, embossed, perforated, wire mesh, regular or irregular shapes up to ¼” thick in a SINGLE PASS. This can be done at production rates ranging from 100 to 350 parts per hour on standard machines, to 1200 parts per hour on special machines. Parts 2” wide to full width of the machine roll to the same diameter.

The Two Roll rolling and curving machine has a rather unique construction feature. This is what we call the anti-deflection system and this system eliminates the possibility of rolling bell-mouth parts, which is caused by roll deflection. The center shaft can deflect under pressure, while the outer tube stays parallel. The two bearings used between the tube and center shaft are of double roller spherical type and are self-aligned bearings. This feature is used both in the top roll and the lower urethane roll. Conventional Three roll machines will normally crown the rolls, trying to eliminate the bell-mouth condition.

The force package of the Acrotech Two Roll machine will consist of either a pneumatic or hydraulic package. The machine itself consists of a set of linkage that is powered into position by a hydraulic or pneumatic cylinder. Once the linkage is into position, it actually over-centers and mechanically locks the roll into position, thereby eliminating the need for the hydraulic or pneumatic system to provide the pressure. What this means is the machine is mechanically locked into position and this position cannot change with the entry of material, thereby giving you a repeatable part diameter. The drive package is a very simple and low maintenance system consisting of an electrical motor and gear reducer and a chain drive to another set of sprockets, further reducing the rolling speed and then directly to the urethane roll. The reason we are powering the urethane roll is to eliminate any slippage that would be caused by rolling oily material. The urethane roll itself is not affected by grease or oil; therefore, de-greasing of the sheet stock is not mandatory.

The Two Roll rolling and curving machine is a machine that is aimed at the high production market. Since each diameter part must have an individual sleeve or shaft developed to produce this part, it is not feasible to use this style of machine in an atmosphere where there are a very low number of parts produced and a very high number of sizes. Rather, we are looking for a market where there are a high number of parts to be run.

Commercial quality hot rolled and cold rolled steels in the 1020 carbon range have a wider tolerance of spring-back and are, therefore, subject to more variation than the lower carbon steels in the 1010 carbon or lower range. This means that with commercial quality steels, a change can be expected from one shipment to another, or even within the same batch of material being used. This change in spring-back will alter the free rolled diameter of the finished part. With the precision roller, compensating for spring-back variations can be accomplished by changing the diameter of the slip-on-tube being used. Acrotech cannot be responsible for the variation in spring-back due to different material thickness or temper from the material submitted for development or subsequent materials used.